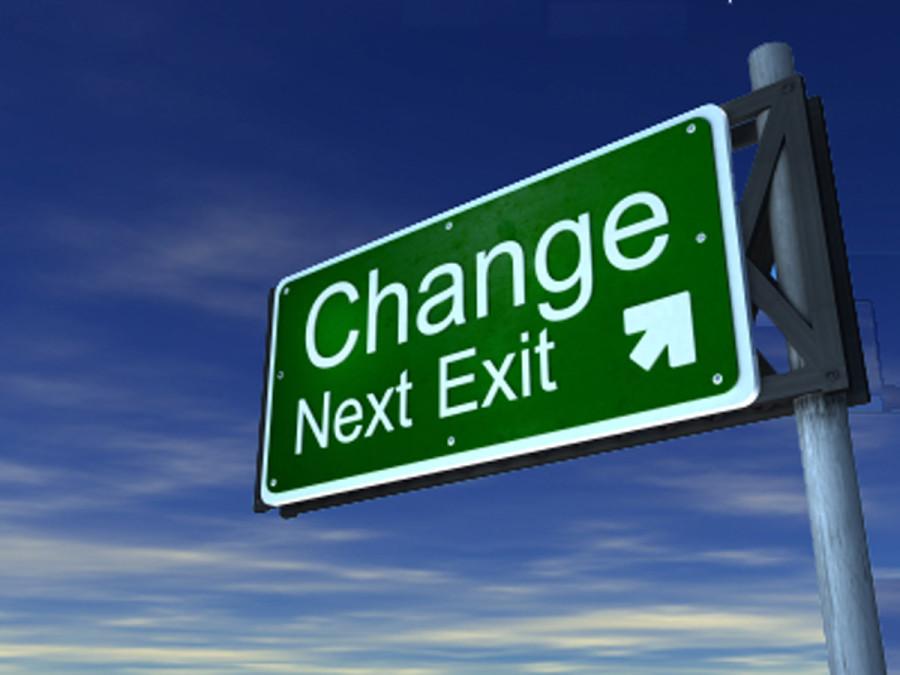 Flashing a bright smile, DHS Principal Kerry Lynch ushered us into her office. After waiting a few minutes, she strolled in munching on an already peeled apple. “I eat a peeled apple everyday,” she said.

“I peel it and wrap it tightly with Saran Wrap so the apple doesn’t brown. I’ve done that every day for a little over a decade.”

There are lots of things DHS students do not know about Ms. Lynch, but on April 9, DHS students received an email from Ms. Lynch announcing her resignation from her position as Dartmouth High School Principal, which sparked the interest of the DHS community.

Ms. Lynch has been DHS principal for five years. “I came here because I was hired by the good people of the town,” said Ms. Lynch. “I was thrilled.” It was her first position as a principal.

Prior to arriving at DHS, Ms. Lynch worked at Lowell High School for five years. “I was the Social Studies Department Chair for two years and the Coordinator for Student Support Services for three years.” Ms. Lynch explained that she was ready to take the DHS job because her son was graduating from high school, giving her more free time.

Ms. Lynch plans to be in Houston in the winter because it’s warmer than New England. “I’m not selling my house in Dartmouth,” she said.

Many DHS community members wondered why Ms. Lynch decided to announce her resignation so abruptly. “It’s time. There are so many different layers of things,” she said.

When asked who would fill the next principal role, Ms. Lynch responded that she would not be involved at all with the selection process.

Junior Mickenzie Kamm and junior Matt Jones were both sent emails asking them to represent DHS students in the search process for a new principal. Both students had to sign a confidentiality agreement not to be biased and to protect the process by being confidential.

“I’m looking for the new principal to be approachable by both students and adults, personable, and open to keeping the same Dartmouth traditions, such as Mr. Dartmouth,” said Kamm.

According to Kamm, there were originally 37 applicants, but the count is now down to 35. “I have to review them [the applicants’ resumes] on my own time at Bush Street,” said Kamm.

Jones is looking for experience in the new principal. “We’re reviewing the resumes this weekend. We have to finish reviewing them by Tuesday,” said Jones.

Unified Art Lead Teacher and selection committee member Judy Cronin said, “We had a meeting with [Superintendent Ana] Riley. Mrs. Riley chose three teachers as well as the deans to team up and form a search committee.”

“We’re sifting through the resumes,” Mrs. Cronin continued. “That will be done this week, and then the interview process will begin.”

Mrs. Riley said, “The finalists will be interviewed by various stakeholder groups and then by the vice chair of the school committee, Mrs. Logue, and me.”

Mrs. Riley added, “State law regulates that the superintendent is the only person who can ‘officially’ hire a principal, so ultimately the final decision is mine.”

If the candidate isn’t announced before school is out, it will be announced on the DHS website. A decision should be made before July 1.

In the meantime, Ms. Lynch is working on her own future plans. “I’m like a junior just trying to figure things out. I don’t know where I’m going yet just like juniors don’t know where they are going to college. They still have to look and decide,” she said.

Throughout Ms. Lynch’s years at DHS, and even prior to, she has lived by the idea that “luck is when opportunity and hard work come together.” She read this aloud to students when she first came to DHS.

She said that her time at DHS has been uplifting and memorable. “There are definitely things about DHS I will not forget,” said Ms. Lynch.

“I was on the Principal’s Advisory Committee for the past two years with Ms. Lynch,” said senior Austin Williams. Williams said that she was very caring about the student body, and that she will be missed.

“Standing out there in the morning, that’s when good stuff happens,” Ms. Lynch said, looking back on her time here.

“She used to be my homeroom teacher freshman year. She would tell us about her kids, and I remember her as being very personable and enthusiastic,” said senior Kristina Georgadarellis.

Georgadarellis added, “It feels like she is graduating with us because she only entered a year before us. It’s kind of funny.”

Ms. Lynch made an effort to know students on another level too, such as activities and clubs they participated in, as well as their academic stature.

“I think DHS kids are excellent, great-spirited, and respectful. I want the students to know that and believe that about themselves,” she said.

“Every time a picture or article was in the newspaper about my performance in a meet, Ms. Lynch would always cut it out and give it to me, or I’d find it on my desk first block in AP Bio,” said senior Ethan Biron.

Ms. Lynch also made a conscious effort to attend at least one event per club, sports team, or music group every year.

She said that DHS is a great school as it is, and that schools are set up on a continuous cycle of improvement.

Ms. Lynch said that she wishes for the next principal of DHS to really get to know the students.

“She just made it her job to be a friend to the students,” said senior Toby Monte.