Behind the mysteries of marching band drill 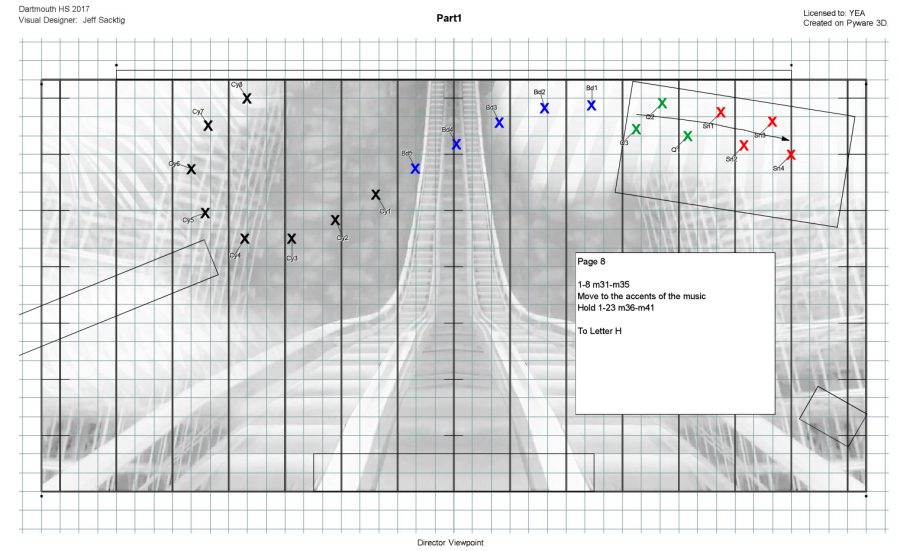 A drill sheet from this year's Indoor Percussion show.

Michael Rayner, known affectionately by all as Mike, doesn’t spend his autumn Saturdays like most would choose to. He spends them in the student parking lot at DHS, driving across Southern New England, and sitting in stadiums for long periods of time. After all, he is one of the lead instructors of Dartmouth’s Marching Band.

In past years, he has had a rather important role in the band’s performance. He helps design the visual and musical aspects of the show, teaches the entire band how to march, teaches music when necessary, and keeps the band on task for the entire season. He’s been here since 2011 and happily comes back every year. He does this because of the level of commitment the community and students give, and what the band can achieve as a result.

This year, his role was even greater. He wrote the entire marching part of the show, along with his aforementioned usual role. Into the Light of Spring, this year’s marching band show,was one that included long, large panel props that changed colors, banners and streamers, white ski caps, and neon green feathers. However, there was another, more subtle feature that had been added. Worn by every member on the right side of the chest was a small blue ribbon. The show was originally going to be constructed by the same man who had done it for many, many seasons, but that man had to stop this year due to his fiance’s poor health and eventual passing. In her memory, the band had decided to alter its uniforms to support a much loved staff member.

Rayner has written a fair number of shows for local high schools and college bands, so he filled in the spot.

The marching in the show was not considerably different from past years, but the show had some ideas that may have been considered radical. Pretending to be birds, fighting through an imaginary blizzard, and getting caught in the “rain,” all things the band did this year, were previously unheard of pieces of characterization.

Some thought that having drill different from our norm would put us at a disadvantage from other years, but Rayner saw it differently. He thought that it put us at an advantage. According to Rayner, the band was able to make any necessary changes to the show. He also felt they could experiment a bit more.

When asked how he thought the season was going about a week and a half before Nationals, Rayner said, “We’re already at a level we don’t usually get to until next week.”

In the end, the band ended up winning the Division 5 Open Championship with this show and this writer, and Rayner plans to do it all again next year.