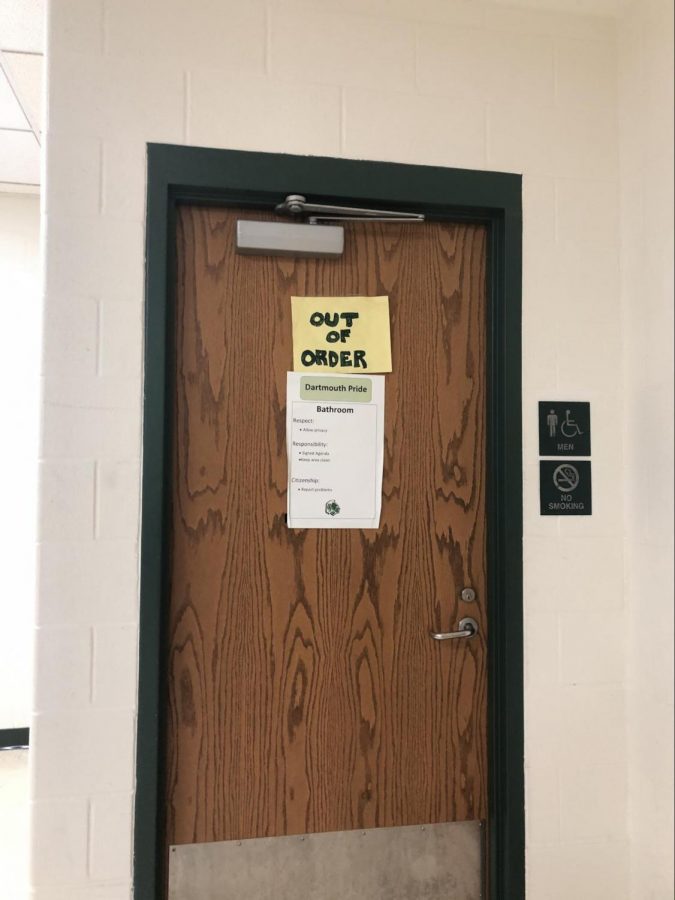 The dreaded "Out of Order" sign on the C-floor boys bathroom.

“I’m tired of the bathroom being locked down. That bathroom was locked down yesterday because they had to replace a door on the stall,” said Assistant Principal Michael Martin. “I think someone had trapped themselves in there and then kicked it to get out.”

Students aren’t appreciating the facilities that are given by the school. The DHS bathrooms have become more of a meeting place than an actual bathroom which can be very concerning to teachers and students. Other than using the facility for its intended use, students are vandalizing and demoralizing the area. These intentional or accidental acts are causing some students to be afraid to use the bathroom or causing the bathrooms to close for days or weeks at a time.

Students use the bathrooms non stop and it isn’t surprising that some students are there to witness when items in the bathrooms are accidentally or intentionally broken.

Sophomore Berkley Roscoe explained the time he entered the boys bathroom closest to the entry of the school and saw one of the stall doors falling. “I remember someone came crashing down on top of the door,” he said. “They were just lying on top of the door and everyone just slowly was walking out.”

Shockingly this isn’t unusual for a problem like this to occur. Mr. Martin said, “It happens every year.”

Some of the broken or damaged areas in the bathrooms are accidental, but many are intentional. Not long ago a privacy partition in one of the boys bathrooms was knocked down off the wall. “I really think it was someone just leaning it against it with their backpack or body weight,” said Mr. Martin. “It’s not meant to hold any weight. It’s just a couple of really small screws, so it falls over with the weight.” Although some of the damages in the bathrooms is not purposefully done, a lot of it is.

“When someone takes toilet paper and stuffs it up the hand dryer that’s not an accident,” said Mr. Martin. “Someone has to want to do that.”

It’s hard to figure out the reason why students are vandalizing and destroying the bathrooms. Some say it’s a place to meet with other students, others say it’s their idea of fun. Head Custodian Richard Pereira said, “It seems to be a big hang out for the kids and they put their trash and everything in the bathrooms and the toilets and the urinals.”

According to Mr. Pereira, students are taking soap cartridges out of the soap dispensers and throwing them on the floor. The school has replaced soap dispensers plenty of times before, and it eventually had to come to a stop because of how much replacing them cost. Mr. Martin said, “There’s one bathroom in particular where we are almost replacing them everyday.”

Replacing the soap affects the school budget and if there is no soap, that results in bathrooms becoming more of an unsanitary place. “Unfortunately, it’s breaking so we have to order them and wait for them to come in,” said Mr. Martin about the soap dispensers. Then we have to install them so it’s not like we have a bunch.” The school is making an effort to fix the soap problem.

Not only is soap misused and thrown on the walls of the bathrooms but also trash is seen by custodians everyday after school. Lots of food and scraps from either lunch or student backpacks are thrown and smashed on the walls. These acts makes it time consuming for custodians to clean the mess and result in “Out of Order” signs on bathrooms. “We just try to keep it neat and clean as much as we can,” said Mr. Pereira. “It’s kind of hard when it’s the same routine everyday.”

Vandalism and graffiti also play a big part in the damage that is done in the bathrooms. Bathrooms are locked for days or weeks because of the amount of time it takes for custodians to clean the graffiti. “That’s why we will have the bathrooms locked,” said Mr. Martin. “We call a custodian to come there with special graffiti remover to remove that graffiti.” Teachers and staff are trying to figure out ways that these damages can be reduced and minimize the amount of vandalism, but there hasn’t been a solution to the problem yet.

As much as these problems are costly for the school, they also affect the students. Sophomore Tristan Couto said, “I don’t like that they lock it all the time.” Many students agree with Couto’s opinion and want the damages to stop. The only reason bathrooms are closed is for custodians to fix or clean them, which has become a consistent issue.

Bathrooms are cleaned daily during the school year. The building is constantly used, even on the weekends when sports and other activities, such as band or theater, practice. Sometimes the bathrooms are cleaned on a Friday and damages are done during the weekend. This leads to the discovery of the damages on a Monday when it’s too late to clean them in time for it to be used by students throughout the day. The bathrooms end up being closed until custodians can repair the damages, one example is the petition which is the wall in between each urinal. “They had to shut down the boys room over here because they were putting up that petition,” said Mr. Martin, “and the custodians can’t have anybody coming in while they’re working.” The bathroom issue is problematic and the only remedy is to convince students to start appreciating the facilities and take care of what they are given.

Mr. Pereira has one simple solution and message considering the damage being done. “Stop breaking the bathrooms. It’s ruining it for the majority of the kids in the building which isn’t fair,” he said.