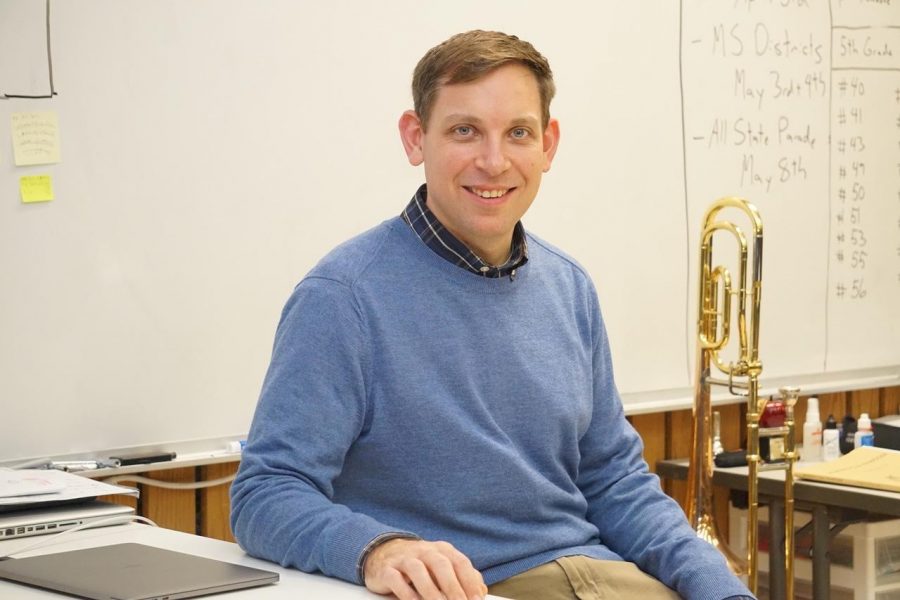 New Dartmouth Director of Music Ian Flint takes over the reins for the 2020-2021 school year.

After over two decades at Dartmouth, William Kingsland, Director of Music, has made an astounding impact on the school.  From his marching band leadership in the countless national championship wins to his connections with his students, Mr. Kingsland, affectionately known as BK, will retire from an extraordinary career.

With the retirement of Mr. Kingsland at the end of this school year, Ian Flint will be taking over the reins as the Director of Music in Dartmouth.  Mr. Flint grew up in northeastern Pennsylvania where he attended Blue Ridge High School.  He says that despite the school’s small rural size of about 300 students, his high school has a longstanding history of musical strength.

During freshman and sophomore years of high school, Mr. Flint marched for the Spectrum Drum and Bugle Corps, a small corps from New York. Drum and bugle corps are groups of marching musicians, consisting of percussion, brass, and color guard, almost like the major leagues for marching bands. Then, Flint auditioned and got accepted into the Cadets Drum and Bugle Corps, a World Class Corps, his junior year. He marched with the Cadets for three years, winning the World Championship in his first year. However, before “aging out,” or marching until he turned 21, Mr. Flint began teaching drum corps in Pennsylvania.

After high school, Mr. Flint attended West Chester University of Pennsylvania, about 30 miles west of Philadelphia.  He already knew a lot of students there with whom he had marched drum corps.

He returned as part of the visual staff to the Cadets in 2004. As a marching technician for the drumline from 2005 to 2007, Mr. Flint taught alongside Tom Aungst, Dartmouth Public School’s systemwide Percussion Instructor and Assistant High School Band Director. After working with the Cadets, Mr. Flint was the Program Coordinator and Drill Designer at Oregon Crusaders Drum and Bugle Corps for four years. Currently, Mr. Flint is the Drill Designer for the 7th Regiment Drum and Bugle Corps.

Mr. Flint began his full-time teaching career at Dartmouth as the Brass Specialist for one year before working at Westport High School and then returning to Dartmouth. He spent a total of nine years teaching music at Dartmouth.

He has been teaching music at Bellows Free Academy in Fairfax, Vermont for the past five years as the Band Director.

Thus far, Mr. Flint has been writing drill for various groups for 20 years, and every year, he writes about 40 shows for different groups around the country.

Mr. Flint says he especially enjoys drill writing because “it’s a great feeling as I design to know that I am producing the best product I can for that group, and the appreciation I get back from the members of those groups makes it worth all the hard work.”

Mr. Flint plans on a smooth transition. “The program has been so successful the last five years,” he said. “I see no reason to change a good thing.”

By teaching music to students, Mr. Flint serves “to give students the same opportunities [he] had when [he] was a student.”  In particular, his high school band director, a phenomenal trumpet player, always encouraged Mr. Flint and his peers to participate in other music programs, such as youth orchestras and drum corps.  He vividly remembers his band director playing “Maynard Fergusson records in the band room right after school.” Mr. Flint recalls these moments with nostalgia. “It was always a great time hanging out with my friends socializing and listening to that music,” he said.

“Listening to his band made me realize that there were very few limits in music,” he says.  Mr. Flint’s band director in high school served as his inspiration to continue on playing and ultimately teaching music. Mr. Flint credits his band director with helping him discover his passion for music. “Without the guidance of my music teachers,” he said. “I’m sure I would have been lost coming out of high school.”

In light of the current COVID-19 pandemic, Mr. Flint explains that he and the other music instructors at Dartmouth are preparing to handle what is in their control.  He hopes to support students and staff through this transition. Instructors are hoping for the best and are moving forward, adapting with the evolving situation.  No matter what the fall season brings, Mr. Flint “plan[s] on producing a high quality entertaining show and [to] do our best to achieve excellence.”

Admiring the unique activity that playing music is, Mr. Flint remarks, “Music provides an opportunity to make connections with your peers, develop teamwork, work towards a common goal and achieve excellence as a group.”