Hero emerges from strange accident between bus and deer 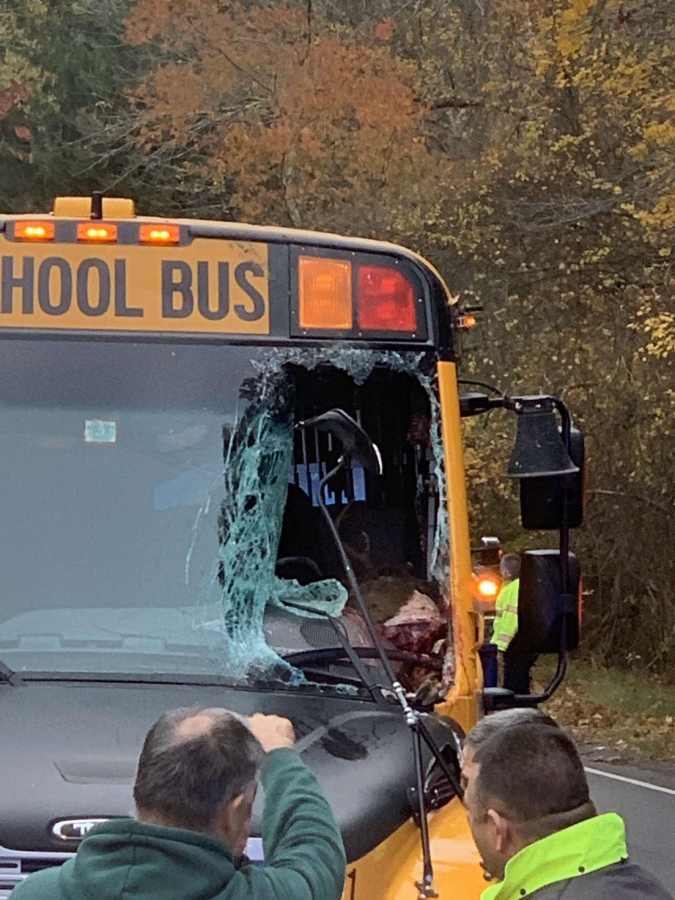 A direct view into the wreckage caused by a deer jumping through the window of a DHS bus. Bus driver Mark Jardin kept students safe throughout the experience.

It appeared to be a normal Tuesday morning – until an astonishing accident left a deer through the windshield of a local bus, prompting an ultimately chaotic scene.

The accident played out on October 29 at 7:12 AM along southern Chase Road, when “all of a sudden I heard Mark [the driver] slam on the brakes and the whole entire bus jerked forward,” said sophomore Autumn Sineiro. The deer involved made contact with a car on the opposite side of the road, went airborne, and flew through the windshield.

The collision with the deer in conjunction with the abrupt stop where the speed limit was 40 MPH led to a powerful impact upon collision. In fact, upon the windshield smashing, glass shattered and dispersed all the way to the back of the bus. “I looked up at my friends Brennan and Madison,” said sophomore Autumn Sineiro, “and we had glass all over each other. My phone had shot from my seat to the front of the bus.”

The freak accident meant only one thing for bus driver Mark Jardin; to get all of his kids off the bus safely.

Despite being smothered in deer blood and specks of glass, and in what some would consider a life-threatening situation, “He remained calm and helped the children stay calm as well,” said freshman Madison Stott.

“Even though he was badly injured himself,” Stott continued, “his main priority was making sure the kids were okay and safe.”

Along with four other students who faced  injuries, Mr. Jardin suffered a broken hand. As a result, he will be out of work for approximately eight weeks, while recovering.

Having heard so much positivity surrounding the bus driver, parents of the student passengers have set up a GoFundMe page to help aid and cover the costs of Mr. Jardin’s recovery.

Having been a passenger of Mr. Jardin for four years myself, I can confidently state that he’s the best bus driver I’ve ever had – quite possibly the best bus driver out there. The way that Mr. Jardin cares for his kids is unmatched, and as a result I don’t have enough good things to say about him. Not many people can say they’re looking forward to the end of the day simply because they get to take a bus home. Riding that bus was a privilege.

In Dartmouth, we are a community – we support each other. Mark Jardin has clearly done his part. The Town of Dartmouth can pay him back by supporting him through his  GoFundMe page.

“Even though he didn’t know every single kid personally, he cared about every single one of us,” said Sineiro, “That itself can just show you what kind of a person Mark is.”