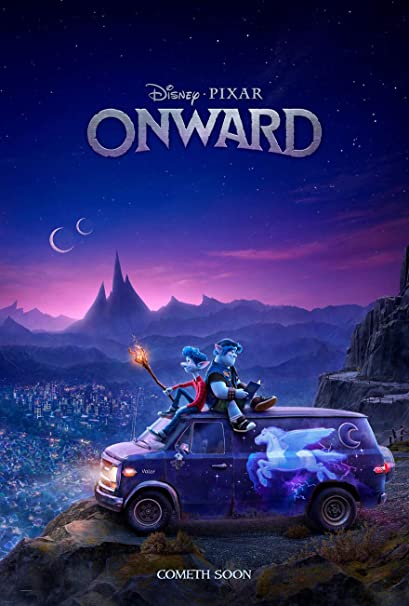 Pixar's "Onward" is not a typical Pixar film according to our reviewer Josh Moniz.

Onward, from Disney’s Pixar Studios recently became available on Disney+, Disney’s digital streaming service, Friday, April 3.  Due to COVID-19 concerns closing movie theaters, many people have yet to have the chance to watch the movie in theaters even though it was released in theaters on March 6. Fortunately, Disney has released Onward early, so that its Disney+ subscribers can watch it while quarantined.

“Long ago, the world was full of wonder.  It was adventurous, exciting, and best of all, there was magic.  And that magic helped all in need,” says the narrator (Kyle Bornheimer) in the opening scenes.

Onward is set in modern times but in a world of fantasy where elves live like humans.  Magic has since faded away with the advent of technology and new inventions. The inhabitants have magical roots but refuse to believe in them and rely on technology to survive.

Two elf brothers, Ian and Barley Lightfoot (voiced by Tom Holland and Chris Pratt respectively) live together with their mother, Laurel (voiced by Julia Louis-Dreyfus).  The father of Ian and Barley passed away before Ian was even born.  Barley is quirky, eccentric, and dwells in the magical fantasy their world used to be.  On the other hand, Ian is a shy teenager who longs for a proper father figure.  He struggles to muster confidence for even the simplest tasks.

This parallel to the real world helps to relate the character very well to the audience.  It is easy to identify with a lack in self-confidence or the loss of a loved one who passed a year ago.  In fact, the movie was inspired by a real-life challenge experienced by director Dan Scanlon.  Scanlon’s father, like Ian’s, passed away too early for either to remember them.  Barley, a nod to Scanlon’s brother, Bill, only has a few memories of his father.  In the movie, the brothers find a tape and play it, hearing their father’s voice.  Dan Scanlon based this off of his own experience when he heard his father’s voice for the first time.  Scanlon had found a cassette tape in which his father spoke only two words, “hi” and “bye.”  “What more do you need,” Scanlon remarked on hearing his father speak, “if you are only going to get two words, it’s nice to have those two.”

The brothers get a chance to meet their dad by bringing him back alive with a spell and their father’s old magic staff.  But when only the bottom half of their dad’s body is brought back, the brothers set out to find another phoenix gem to complete the spell, with their mute father’s legs trailing behind.  The completed spell will allow their father to return to life for one day.  Ian and barley have until the sun sets to complete the spell and experience the full presence of their father.  However, once the sun sets, the spell will expire and the brothers won’t be able to meet their father.

On the journey, the brothers convey countless valuable life lessons.  The major ones being, brotherly love, leadership, resourcefulness and making the best out of nothing, self-confidence, individuality, and the idea of perseverance.

In natural Disney and Pixar fashion, the plot events and characters throughout the movie tie into each other in an apparently well thought out manner.  Every little detail has been meticulously drawn out.  And the classic Disney messages resonate with viewers of all ages.

In the introduction, the connection Ian and Barley are still able to make with only the legs and feet of their father is heartwarming. One of Barley’s few memories of his dad is a call-and-response tapping; a simple rhythm on his feet.  Even without hands, their father taps the rhythm on their feet, coming full circle with Barley’s recollection of his father.

With that and everything else in mind, Onward partly falls short, considering the studio it came from.  Pixar, with movies such as Toy Story, Up, Monsters Inc, and Finding Nemo, sets the bar high.  The studio has never failed to please and has an astounding reputation.

Onward seems to be the only Pixar movie that could have come from another animation studio.

Onward lacked a sense of unique suspense that Pixar usually brings to the table.  While the plot can be guessed in almost every Disney movie, this one seemed too predictable: an unlikely and bickering pair team up, receive a magic object, embark on a quest, and defeat a ferocious monster in the end.  Just the idea of a mythical quest with characters who are unsure about themselves and must put aside their conflicts to achieve a common goal is cliche.  The audience could guess the next action in the “cookie-cutter” movie too easily.

Its Rotten Tomatoes score is 88%, which is phenomenal on its own. Critic Bob Mondello says, “even mid-level Pixar still casts a spell.”  Peter Travers says that the movie is “still worth your while,” calling it a “sweet-silly-slapdash tale.”  However, compared to another Pixar movie it falls short.  The first Toy Story, released 1995, received a whopping 100% Rotten Tomatoes score.

Personally, I wish the title of the movie, Onward, held more significance.  “Onward” was mentioned about twice and only held great importance once.  The message, to always move forward and persevere, behind the word is noteworthy, however, the theme is lost because it wasn’t stressed enough.

Even so, the animation team proved their strength because the ending isn’t necessarily Disney’s cliche “happily ever after” ending.  It gives an unexpected twist, allowing for the characters to tie in the theme of brotherly love.

Any viewer is sure to appreciate the Disney touches, small humor, and bittersweet ending.  Grab your tissues because it’s a bit of a tear-jerker. The characters truly come together and learn to love each other in true Disney style.  From the relationships between characters to the plot developments, the movie clearly has the special Disney touch.

Onward receives a solid ⅘ stars in my book for its relatable characters and their experiences, detailed Disney touches, and real ending.  While it was too predictable at times and it didn’t end as I had hoped, the ending completed the movie and strayed from being too cliche.  The animators at Pixar truly found a way to make you believe there’s, “a little magic left in you,” enough to “put it in O, for Onward!”