It was not just about volleyball, it was about much more 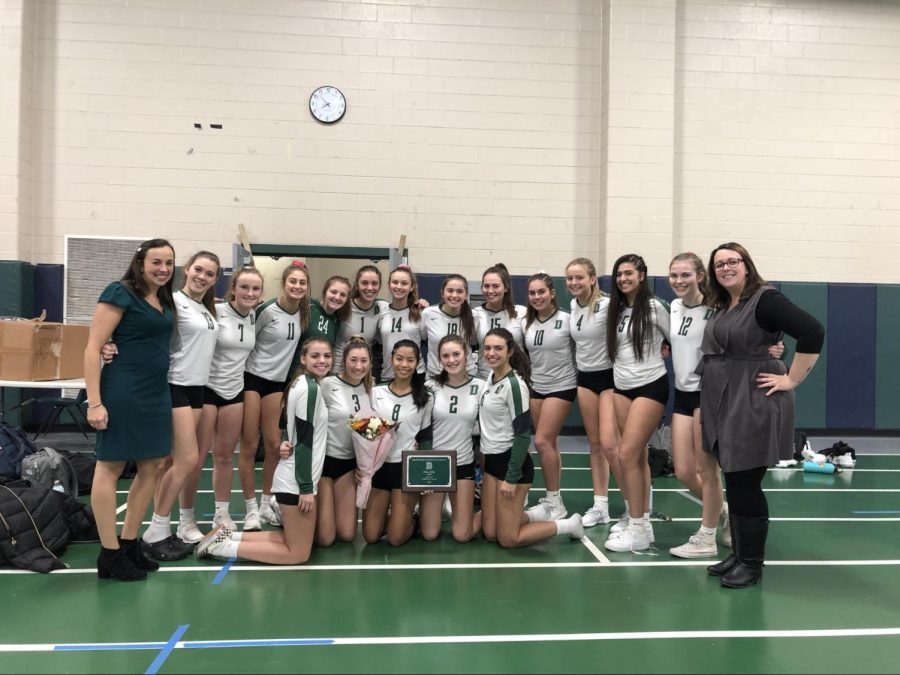 “I’m a bit nervous,” said junior Emerson Clarke. “I usually perform at 4:00 with not a lot of fans.” Emerson Clarke’s duty is to perform the “Star-Spangled Banner” before every home game for the girls volleyball team, but this game, the DHS Girls Volleyball Team played a strong opponent in Brockton High on October 9 at 5 o’clock.

Earlier in the day, the team asked students to attend the home game against Brockton through the morning announcements. Students did not disappoint. The volleyball game was the first Friday Night Lights feeling -without any dangers of Triple E- with students creating a student section tucked into the far right lower corner of the bench. They were loud. Their chants echoed and richoched throughout the gym, and started chanting war against the Brockton fans.

It was a tight game. Dartmouth won the first set 25-23. Dartmouth had an undefeated record on the line against a really good Brockton, and the pressure was distinguishable. The fans from each side immensely wanted to win. Brockton forced deuces and won the second set 26-24. The Carlyn Lynch Athletic Center was ready to implode; students were cheering for Dartmouth and jeering Brockton, and this caused a chanting battle between the fans. For the first time in DHS history, the student section matched the tenacity of a volleyball game.

The game is 1-1. The gym is exuberant. The girls’ backs are against the wall after the Brockton counterattack. The 2019 Dartmouth Girls Volleyball team had seemed to awaken their greatness in that game. They allowed Brockton to score less than 15 points in the next two sets and won the game.

The DHS Girls Volleyball Team has been the most legitimate team since the football department’s Division 3 Super Bowl winner. The team coached by Rachel Lassey leaped to 3rd in the state in the beginning of the season.

Their success is traced inside the Carlyn Lynch Athletic Center where the greatness is practiced. During practices, the gym is filled with the aura of acceptance and inclusiveness, with an atmosphere of love and fun. The gym’s climate is accredited to the dynamic duo of the Lassey coaches – sisters Rachel and Jessica. Rachel is the head coach, while her older sister Jessica is the junior varsity coach. “It’s great to have my sister on my coaching staff. The girls know we are putting in our 100, so they model us by putting in their 100,” said Head Coach Rachel Lassey.

Her 9th season could easily be one of her most successful seasons. The team won the first ever Southeast Conference Championship by displaying their greatness throughout the season, a greatness comes from full-commitment and unselfishness. They ultimately ended their season against Oliver Ames in the semi-final.

“We really preach to buy in the commitment factor: having each other’s backs, and being supportive,” said Rachel Lassey. The highlights from the practices – other than lightning serves and thunderclap kills – are their camaraderie; when a teammate falls or messes up, another one is there to help.

The 2019 Volleyball Team had the ingredients for greatness. One was the love. The love for the game, the coaches, and the players. Another ingredient was limited time. The team was filled with 10 seniors, 1 junior, 1 sophomore, and 1 freshman. “It’s the last year, it’s the last chance,” said senior Co-Captain Lindsey Olivieira. “That is our motivation for this season.”

The senior captains Lindsey Olivieria and Cierra Yim were the catalyst for dominating the games. “They started as timid freshmen and grew into assertive seniors,” said JV coach Jessica Lassey. “Now, they are running the tempo on the court which is explaining our success.”

“Lindsey’s confidence has improved. Since it is senior year, she had this mentality that ‘no one will take anything away from her,’” said the JV coach. Lindsey dominated throughout the season like her counterpart. “Cierra is a great settler and her volleyball IQ had advanced since freshman year.”

Cierra achieved 1500 assists mid-season against Sandwich and 2000 assists at the end of the season against Hingham. “It’s amazing that it’s in the assist category,” said Cierra. “It’s a team effort when comes to assist.”

Unfortunately, the season ended at Greater New Bedford Vocational School against Oliver Ames in the semifinals. The game was 3-2 and the record was 21-1.

The loss was sad to see, but the season result was immortalized. After this year, volleyball will become a respected department in the community, drawing big crowds for future Dartmouth players. A team filled with seniors, this could be considered a major footprint in DHS history for the Class of 2020. “No other Dartmouth team could possibly surpass this. It would be hard to live up to. This team is like ‘The Dream Team,’” said sophomore Sorriele Lawton.

The success is traced to the head coach and her dedication to the girls. “We care about them more than winning,” said Rachel Lassey. “I think they know we support them.”

Rachel Lassey will continue to be a great coach and a great role model for the volleyball team. “She’s the first female coach I had in high school,” said senior Claire Smith. “Lassey is a positive role model. She is somebody to aspire to be.”