For DHS senior athletes, it’s more than a game 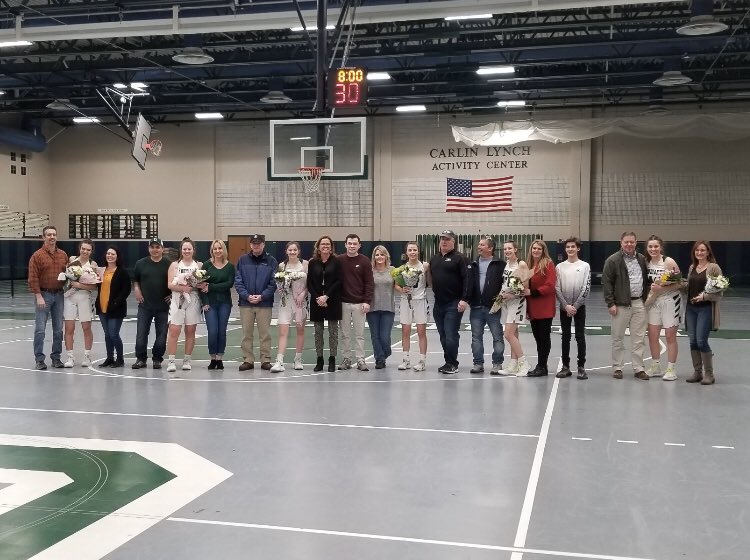 Seniors on the girls varsity basketball team being recognized at Senior Night, before cancellations rained down.

On Monday, March 16, the Massachusetts Interscholastic Athletic Association Board of Directors voted to delay the start of the spring sports season to April 27 due to the spread of COVID-19 throughout the Commonwealth of Massachusetts.

Although this 42-day postponement was implemented for the utmost protection of student-athletes and families, many fear that their time representing the Indians on the field has concluded. It is an open question whether the MIAA will follow the NCAA’s judgment to cancel the remainder of the spring athletic season and championships due to COVID-19. Regardless of further action that is to be made in light of COVID-19, senior athletes at DHS are spending their time off the field reflecting on the privilege of athletics as their time at DHS fades.

2019-20 Standard-Times Girls Basketball Player of the Year, senior Lindsey Oliveira joined the DHS Girls Basketball 1,000 point club in February and was named the 2020 Dave Cowens Award recipient this past Wednesday. She also supported the girl’s volleyball team through an undefeated regular season. Oliveira was gearing up to play her last softball season for DHS before moving on to compete for the Wheaton College Softball team when COVID-19 postponed the start date. “It makes me realize how lucky I was all along,” she said. “This has humbled me to not take anything for granted and to truly make the best of every moment I get to spend with my teammates.”

Senior Boys Lacrosse Captain Ben Clark was looking forward to his final season playing for DHS and guiding a team alongside his close friends. Clark said, “When hearing this news about the season being postponed and even possibly canceled, I was devastated.”

Senior catcher John Correiro on the varsity baseball team added that the situation is “disappointing as a senior to have [the season] cut short.” In light of the situation, he said, “The only saving grace is that it’s not like we’re alone. Everyone who plays a spring sport is going through the same thing.”

For some athletes, one being senior captain of the girls lacrosse team, Claire Smith, this final season held deep meaning, one higher than the game itself. “Lacrosse is a game I have loved since I was in first grade,” she said, “and I’m trying to stay positive that I will be able to experience those final moments as a high school athlete.” Smith is using her time off the field as a lesson.  “We must be grateful for everything we have, because [we] never know when it can be taken away.”

This is a reality that not only athletes, but millions of people worldwide are facing throughout the COVID-19 outbreak. While Americans take a pause in daily life as they are quarantined in homes, many are reflecting on the privilege it is to shake an old friend’s hand, shop with full shelves at the store, go out on a Friday, and of course, to watch and participate in athletics. As senior class athletes remain optimistic as they begin to make their preparations for their following semester, there is no doubt that, as Claire Smith said, “[They] will be counting down the days until April 27.”