Off Kilter becomes a Dartmouth sensation 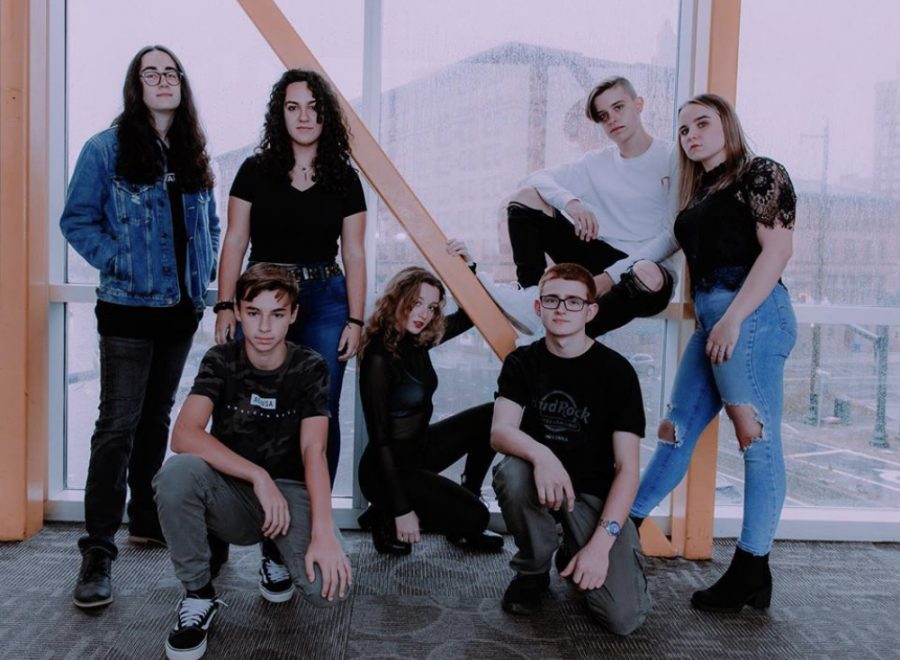 Off Kilter has become a very successful local band in the Dartmouth area.

On Saturday Night, viewers and workers alike were pleasantly  surprised walking into a live band at Ying Dynasty, South Dartmouth. The band, Off Kilter, kicked off the night by playing “Highway Tune” by Greta van Fleet.

The band is composed of a mix of high school students, a few from our very own Dartmouth High. Both drummer Ethan Church, a freshman, and singer Anya Crowell, a junior, can be found walking through the halls or in your classes.

This isn’t the band’s first gig, however, not even at Ying. A well established band from the area, they actually got their start with TJ’s music in Fall River and transferring to Double Bar Music in Westport, both music stores where young artist can learn and thrive.  Originally the idea of both Alyssa (lead singer) and Andrew Oullette (lead guitarist), they wanted to create a band that played original and covers of popular songs. The pair managed to bring their idea to life and the band has come a long way from humble beginnings.

Off Kilter’s performance itself was a popular hit with diners. ”I came to enjoy great music with friends,” said 8th grader Jacob Reimels.  Alyssa Forget and Anya Crowell could be seen walking into the crowd while singing duets and giving high fives to enthusiastic members of the audience. A waitress mentioned that she really enjoy the band’s gig. “The atmosphere is awesome to be a part of,” she mentioned. “It’s a great change of speed from a normal day”.

Off Kilter still manages  to succeed all expectations set for them and continue to preform amazing sets all over the Bristol County area. Fans of the band and the members themselves can follow Off Kilter’s instagram (@offkilterband) and the bandmates to keep updated with the activities and gigs that they are booked for next.

Drummer, bandmate, cellist and a member of the class of 2023, Ethan Church has been exceeding expectations set for him since day one. Well known for being part of a local band Off Kilter, Ethan’s life is filled with school, friends and music 24/7.

What part of your life doesn’t involve music?

Huh. Literally no part. Being honest. When I come home, I just go into my studio and play on my drums all night. The only part of my life that isn’t involved with music is school and my school work. Outside of school, I’m on my drums all the time. I sleep like a normal person, staying out to my studio till like 9-9:30 and go inside and then going inside to bed.

Ummm. Not a set but a I’ve done few songs with Pantara, a very intense heavy metal bound from the 90s. I’ve sat in on friends’ bands and played some songs which was very fun for me. They played lots of fast and energetic music. I’ve dyed my hair blue for an old band, but you couldn’t really notice it from the crowd. Right now I’m doing sets usually from 9-1 in the morning, which can be very intense. But I really love every gig I do.

What’s the most important thing to you right now?

Right now it’s indoor production and being a part of the drumline and the pit at Dartmouth High. That’s really going to get me lots of practice and working under Brandon Carrita and Mr. Aungst. Yes, the gigs help, but the practice and work from percussion and indoor is really what’s going to help me progress as a drummer. Outside of music, friends and family are really important parts of my life. I wouldn’t be who I am without my family or my friends.

When did you know that drums were the thing you would excel at?

I started drumming at the beginning of 6th grade, then I did a music program called Double Bar Music in Westport. That’s really when I got into it. You played with a small mini band and that really showed me I was an energetic player. Double Bar Music had two teachers that guided you through the songs and taught you the emotion and feelings of the song and guided you through that. They help you with learning and counting the measures, but essentially you’re the one teaching yourself.

How important is family and fan support to you?

I’d say that’s the most import part of it all. Yes, drumming is very important but the people that come out and support me means a lot to me. I’ve switched between bands with small followings and my fans really stick with me which means a lot. My family is also important because they drive me around a lot and take me to the gigs which means so much.  If I didn’t have people supporting me, I wouldn’t be who I am today. I’m a confident person going onto the stage and without my family and fans supporting me, I wouldn’t feel the same way, not even in the slightest.

Ummm. Travis Barker, the drummer from Blink 182. He’s the one that inspired me to play drums, he’s also done a bunch of side projects which really inspires me. I’ve known him like before I could walk because my parents always put his music on. He’s really been with me and helped me build the confidence that says that I want to be a big drummer like him. Also another big inspiration is my friend Tony Franco who did drumline in the 1990s. He’s been playing since he was very young and he’s also been friends with my father since he was young. There’s that connection, but also he’s an incredibly amazing player that’s only 32. He’s trying to move out to LA and make it into the music community and that’s just really inspiring to go from Dartmouth to LA. Just never really happens.

What’s your goal for yourself and the band for the upcoming year?

For myself it’s learning as much as I can. My goal in life is to become the best drummer I can; meaning playing 10 hours a day and now that I’m accomplishing that, I’m seeing improvement between today and two months ago. I could see myself being a studio drummer or a touring drummer with a big band like that. I can see that happening in the future and that’s my dream. I’m going to accomplish that with my social media and gaining followers because that’s really the way to grow followers now. I see the band playing more gigs and progressing as players and playing together better, that’s really it.

What’s some advice you would give to anyone trying to learn the drums?

Get private lessons, that’s the biggest part. Self learning is extremely hard and takes a lot of time. Maybe joining lots of music programs like I did with Double Bar Music because that’s really what sparked my musical attention and got me into playing. That was a great experience and I’m still doing it two years later. It’s really great and everyone’s super nice. Playing along to songs is also good. Like if you hear something in a song that you think is really cool try and learn and find out what that part of the song is. Learn as much as you can while you’re still young. For exposure, use social media and try to build your account. I use hashtags on every post, and that’s how I get half of my likes and most of my followers.