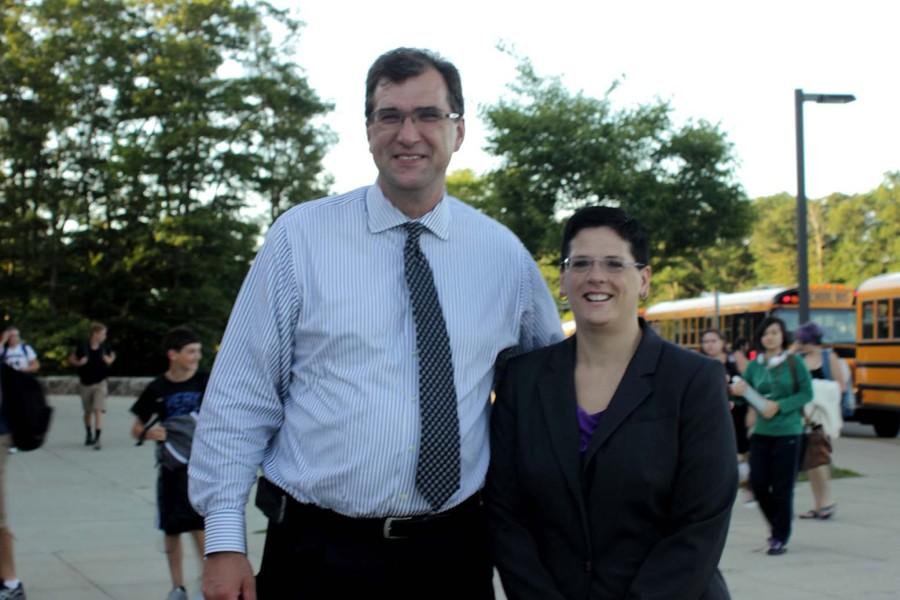 With the start of the new school year, many changes have come to DHS. The floors are waxed, the outside of the building has been repainted, the gym has a new track, and there have been some musical chairs in administration throughout the district. One notable change within administration at DHS is the presence of a new principal, John Gould.

Mr. Gould has been in education for 18 years, and he has taught in various middle school, high school, and collegiate environments, focusing on history. Currently, he teaches at Worcester State University in the summer and leads some online college courses as well. He has had experience working in administration as vice-principal at King Philip Regional High School for five years and as a dean at Groton-Dunstable Regional High School. With a Doctorate in Education Leadership from Northeastern University, Mr. Gould is ready to take a place at the helm of DHS and work to better the school, with our help.

Senior Matt Jones worked with the selection committee for the new head of school as a student representative and had promising things to say. “Mr. Gould seems genuinely interested in the happiness of students here. I am glad we have him on our team,” said Jones.

Along with Matt, senior Mickenzie Kamm also worked with the committee in the selection process. After having worked with Mr. Gould for some time, she said, “He is super invested and genuinely interested in the students. He is also really flexible and willing to listen to students’ opinions and ideas, which I think is an awesome quality of his.”

One thing most students are probably unaware of about Mr. Gould is that he is fanatical about comic books. Being a history teacher, Mr. Gould found that one of the best ways to engage the classes he held was through visual aids like comic books. In an interview, he gave an example of using a WWI-influenced Avengers comic book cover to encourage critical and analytical thinking among his students. “I love to read comic books, buy comic books, buy original art.

At home, Mr. Gould has a wife named Laura and two children named Mary-Kate and Jack. “My favorite activity is playing with my children. I like to take them different places like the beach. I love to see how they’ve grown. During the year I work a lot of late nights, so during the summer I try to make up for that,” he said.

When asked who his favorite musical artist was, Mr. Gould instantly responded. “As a teenager, I would say Bruce Springsteen, the early years. His stuff like The River. I love that stuff. I discovered him with Born in the U.S.A., but then I discovered his stuff like Born to Run, and I really felt like, as a working-class kid, I identified with that.” He added, “I like songs that have a melody and rhythm to them, but also tell a story.”

Mr. Gould also enjoys basketball as a means of connecting with students and to, “try to relate with kids.” Being approachable is one thing that he also feels is important as a new person at the high school, particularly as an administrator. As such, he feels it is important that students know that, “It’s okay to come say hi.”

In addition to his love of basketball, Mr. Gould also has several favorite sports teams. When asked about them, he said, “The Boston Celtics are near and dear to my heart. I’m a Big Larry Bird Fan. I love the Boston Red Sox, and I love the Patriots. But most of all, I love seeing the history of the different sports.”

He elaborated and said, “I’m fascinated by the idea of [someone like] Red Auerbach, being a Jewish man who went down with a largely black team to Southern states, during the days of segregation, and dealing with the frustrations of racism and bigotry.” Yet another historical sport dynamic which interests Mr. Gould is Scottish soccer. “I love the Glasgow Celtic. I’ve recently gotten into soccer. I’m not a soccer expert, but my mom comes from Parkhead, the neighborhood in Glasgow, and I’ve learned recently about the Celtic, Ranger rivalry. It’s the Catholics versus the Protestants. And I’m fascinated by it,” he said.

During his daily hour-long commute to the high school from his town of residence, Medway, Massachusetts, Mr. Gould listens to the radio. “I listen to the tunes, and if there’s a good sports show. Felger and Mazz crack me up, you know, they make me laugh. They’re kind of ridiculous and obnoxious at times, but they’re entertaining.”

He went on, and said, “What got me into teaching was the fact that the one way I can thank my teachers for teaching me how to talk– literally because I have a speech impediment– is by being good to my students. That was my motivatio, and at the end of the day, how do we lead a meaningful life? How do we give life meaning? We help others. And I know that sounds noble and corny, but it’s kind of the way I see it.”

“Just from the assembly in the auditorium, he seems like he recognizes the students as people with opinions on certain issues, not just students. I feel like he will be a good change for DHS,” said sophomore Dan Savoie. And things do look open-minded and promising for many. Time will tell if this is the right way to go into the school year.

Based on his presentation at the start of the school year, senior Korri Esteves came away with a good impression. “He seems like he cares about each of the students, and he would like to change Dartmouth to benefit us. I think if he keeps this up, he’ll be a great administrator,” said Esteves.

Mr. Gould said, “I feel like I’ve landed in a really great place.”